A draft of the district Local Control and Accountability Plan is available in the “About Us” section, or you may review it at the Business Services Office at 8910 East Slauson Avenue weekdays from June 7-17, 2019 between 8:00 a.m. and 4:00 p.m. You may submit written comments regarding the specific actions and expenditures proposed in the LCAP to the Superintendent’s Office no later than 4:00 p.m. on June 17th. Thank you.
Read More »

Flyer Regarding Transportation to the Boys and Girls Club of Whittier

Effective May 20, 2019, High Performance Learning Environments’ (HPLE) contract is considered terminated. HPLE voluntarily submitted a letter of resignation on May 17, and the District responded on May 20 confirming termination of the District’s agreement with HPLE, subject to board ratification. Upon board ratification, the agreement will be terminated without cause or penalty; the District has requested that HPLE return all applicable records, software, and plans within fourteen days. The Office of the Superintendent is working with the District’s legal counsel to prepare and publish a Request for Qualifications/Request for Proposals (RFQ/RFP) for construction management services in order to ensure the Measure ER bond construction program remains a high-quality, on-schedule and on-budget project.

Please feel free to contact the Office of the Superintendent with any questions. We look forward to continuing our work to achieve academic excellence for all students in the El Rancho Unified School District and providing our community with world-class instruction and facilities.
Read More »

The Los Angeles County Department of Public Health has issued a measles outbreak advisory as they are investigating a number of reports of measles. These include local outbreaks of confirmed cases within Los Angeles County. Public Health urges residents who have not been fully immunized against measles to contact their healthcare provider to get fully immunized in order to better protect their individual health and to prevent the spread of measles to others.

ERUSD is Accepting Applications for the Citizens' Bond Oversight Committee

Applications are available online at www.erusd.org/apps/pages/bond_program and at the ERUSD Business Services office located at 8910 East Slauson Avenue, Pico Rivera, CA 90660. Completed applications are due to the ERUSD Superintendent’s Office no later than 3:00pm on May 31, 2019.

Schools have been instrumental in providing a safety net against the effects of discrimination and lack of acceptance for the LGBTQ community, which can result in higher dropout rates, lower economic success, higher rates of homelessness, higher rates of substance abuse and suicide. According to the 2017 National School Climate Survey, 82% of LGBTQ students report hearing anti-LGBTQ remarks, 7 in 10 report being called names or threatened based on their sexual orientation, more than one-third report missing at least one day of school because of feeling unsafe, and 49% report cyberbullying. This can negatively affect their academic achievement, as well as their mental and physical health.

Data Confirmation is now Open for all grade levels

Every year all returning students must complete the Data Confirmation process. This is an opportunity for parents to edit/confirm emergency contacts, review school-site policies, & renew the yearly authorizations. This process MUST be completed for every student before classes/teachers will be officially assigned for 2019-20. Please sign in to Parent Portal. Thank you
Read More »

The El Rancho Unified School District is aware that some community members have expressed concern regarding recent staffing changes in school site leadership. While transparency is always a priority for the District, we are legally prohibited from publicly discussing personnel matters in order to maintain confidentiality. Reassignment of administrators is a common practice in education, and in this case fulfills identified needs at various school sites. The District is confident that these administrators will continue to positively impact El Rancho Unified students in their new assignments and thanks them for their service and commitment. In the coming days, the District will reach out to the community at each affected school site to outline how we will recruit, evaluate, and seek community input on new school site leaders.

Although we understand that some might naturally be disappointed upon learning of these changes, we urge our parents, teachers, and staff to not let those feelings negatively impact our students’ daily learning. We urge all parents to have their children attend school as regularly scheduled.
Read More » 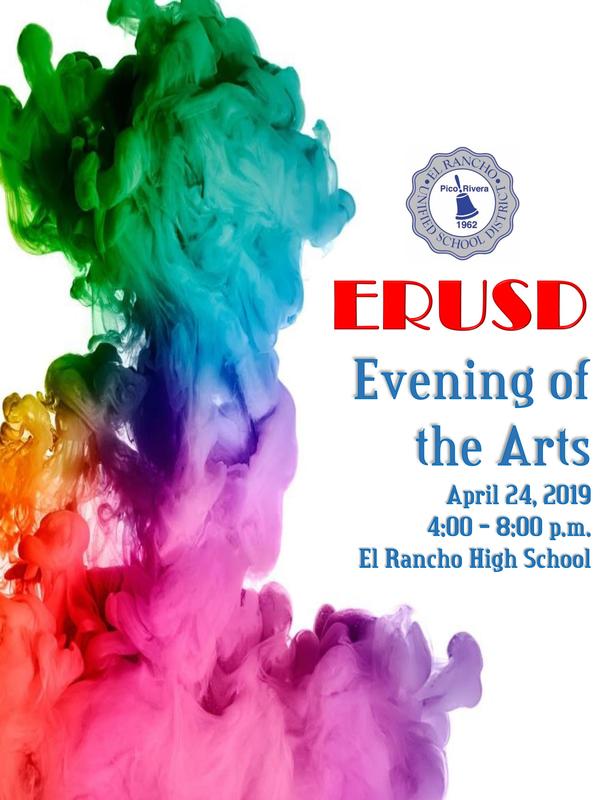 ERUSD Evening of the Arts and Health Fair

Please join us for our second annual Evening of the Arts! Our Visual and Performing Arts Showcase will be filled with student art displays and student performances.


In addition to the exciting performances and art displays, the evening will include the annual ERUSD Health Fair which promotes health awareness and education for the whole family in a fun, supportive environment.


Bring your chairs and blankets. Food will be sold by El Rancho High School Band Boosters and food trucks. All members of the community are welcome to attend.
Read More » 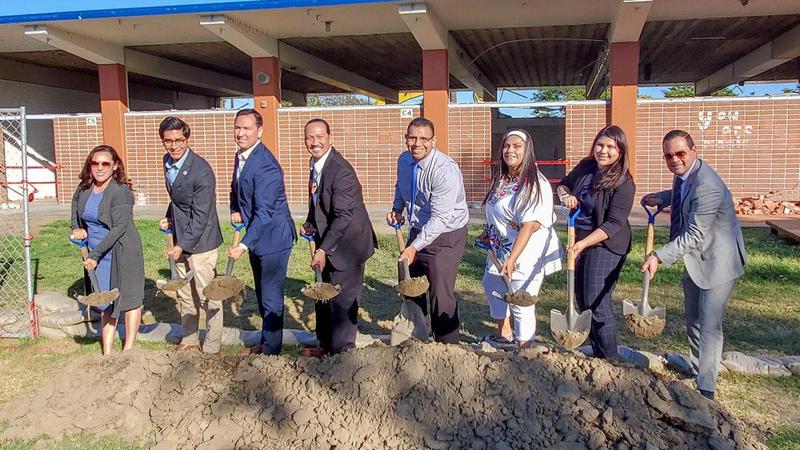 On Friday, April 12th, the El Rancho Unified School Districted hosted a groundbreaking ceremony and celebration to mark the beginning of the transformative reconstruction of El Rancho High School. The groundbreaking was the result of years of preparation, research, and community input in response to an identified and critical need for world-class learning environments and facilities that would sustain the district’s mission of excellence well into the 21st century. More than 100 students, staff, elected officials, and community members joined in the celebration. Also present were Pico Rivera Mayor Brent Tercero and representatives from the offices of U.S. Representative Linda T. Sánchez and California State Assembly Member Cristina Garcia, who lauded the district and community for setting the ambitious high school transformation plan in motion.